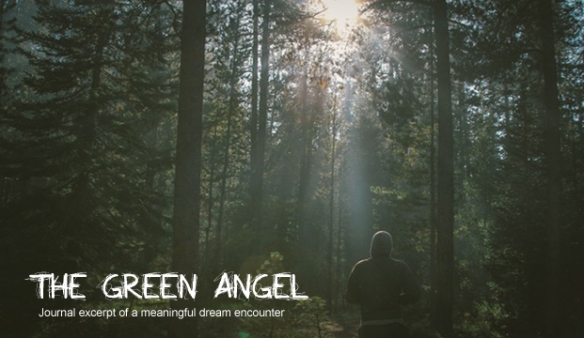 Journal excerpt: So, there was this angel, all green. Absolutely green. Green eyes, green skin, green clothes. Everything was green. So much green, that it was difficult to know where his body stopped and his unusual clothing started. He must have been about 6ft 6 inches, well over 2m high and ‘solid’, built like a wrestler. And, there he was, standing in my small inner-city garden as I looked out the living-room window. I have to admit I was somewhat confused and perplexed.

A dream it may have been, but I was aware. In that dream I was thinking and reasoning to with myself, and an internal dialogue was taking place about my next course of action. The very next moment I was in the garden, and just a few feet away from the angel. He started to walk away, as if to leave.

Immediately, my mind went into overdrive as I sought to delay him. The only thing I could think, was to ask him a question, to ask him if there was anything he needed.

Immediately, I found myself in the kitchen, reaching for a glass and started to fill it with water. Even then, I was thinking of how to prolong this extraordinary encounter, and so I only half filled the glass. Surely, I thought, that won’t quench his thirst, and he’ll stay even longer.

I went back to the angel in the garden, and he took the glass of water, and drank. He turned slightly and started to leave. Again, in my dream I was reasoning how to make the most of this encounter. I knew I had enough time, probably, only for one question. I thought to myself, should I ask, ‘Is there a God’, but I had answered that one myself – after all, here’s an angel, a messenger from God. Still moving towards the garden wall as if to leave, the angel stopped monetarily, probably anticipating my one and only question.

The reply was more of a ‘feeling’, an experience, rather than just words, and so his reply could have been ‘love’ or ‘lovely’. I like to think that in that Otherworldly, brief encounter where experiences are as important as words, and maybe, more so, that it was both of those words! And, then the angel vanished.

I woke up, and over the next few weeks and months researched the Green Angel, and found that he appeared in the writings of at least two or three cultures, is a messenger of Life itself, and has an association with water, the water of Life.

I recount this dream only because it meant something to me, and still means a lot to me. And would dearly enjoy hearing any of your similar encounters.

There’s just a little bit more to this encounter. Timing. Some months after this dream (and it was eight years ago), I was diagnosed with oesophageal cancer and my world was turned upside down for over a year as I underwent tests, endoscopies of various sorts, drugs, chemo, radiation and a massive operation. However, tough times that they were, I took some comfort and strength from that dream.

Interestingly, that dream occurred even before the cancer diagnosis. Had it happened after the diagnosis – sceptic that I was, then – I would have probably said that that dream was a natural, cerebral, to-be-expected, reaction to offset the alarming news of cancer. Maybe the product of undigested cheese! But, it couldn’t have been a reaction, nor any of those things, as it happened even before the diagnosis, even before symptoms had appeared, even before I knew that my life was about to be shook to its foundations and wouldn’t be the same again. It was almost as if this Otherworldly visitor knew that this message had to be delivered beforehand, otherwise it would have been dismissed. I couldn’t dismiss this encounter, and I’m pleased I didn’t.