..with apologies to Woody Allen for  nearly using a movie title in which he had a small part to play [pun intended].

I can’t wait for the ancient Celtic and Druid festival of Lammas, also called Lammas-Day or the season,  Lammastide. It traditionally starts on August 1st, and it is the first harvest in the calendar. It is such an important occasion, and one that brings back so many fond memories for me.

The Church celebrates harvest, now, one Sunday in September, and that type of harvest celebration service is fairly recent: it began in 1843, when Revd. Hawker, then the Vicar of Morwenstow in Cornwall, revived the ‘forgotten’ and ancient service of Lammas, as a once-a-year (new) service. We owe a debt of gratitude to him for that. But, there’s more.

The ‘revived’ once-a-year, harvest festival may seem normal to many people today, but originally there were three ancient harvests and so, three harvest celebrations. I like that idea! Much more celebration! Much more fun! Deeper remembrance! And, a greater appreciation of the harvest(s), especially from rural communities of yesteryear, and from latter-day Celts and Druids, too

The Celts originally called this time, ‘lughnasadh’ (pronounced ‘loo-nas-sah’) after the Irish deity Lugh. But many call it Lammas (myself included), after the Anglo-Saxon festival of hlaefmass – loaf mass. And it’s from that word that we get the word Lammas! It was the grain harvest, hence the reference to bread, and the baking of bread to celebrate the season.

So, my grandmother, a great one for making home-made food would, especially at this time, make bara brith – Welsh for ‘speckled bread’. It’s similar to the Irish loaf, barmbrack.

Oh, this was my favourite type of bread as a child. A cross between bread and cake! The smell of baking bread over the hearth in her north Wales county cottage was heavenly, so inviting, and so impendingly-scrumptious. I can still remember the smell of that baked bread wafting up my nostrils, and my stomach rumbling in anticipation.

Lammastide marks the slow decline of summer and the inevitable onward march of winter drawing nearer.

Lammas, then, is a time of giving thanks to mother nature for all her fruits, gratitude to the Source of All, the Lord of the Harvest, and a reaping of what has been sown.

In previous years it was a time of fairs, trade and much merriment. Not just a sedate service at a local church (not that there’s anything wrong with that), but it was a ‘right ol’ knees-up’ after the hard work of gathering in the grain harvest, and a  celebration in rural towns and villages as though life depended on that harvest – because, it did!

Bara brith, for the cooks amongst you, is bread made from a delightful combination of mixed fruit, especially, but not only, of blackcurrants, cranberries, orange zest and honey, sugar and eggs, and flour, with mixed spice, and ofcourse, the ‘magic ingredient: half a pint (or 500ml) of cold tea! 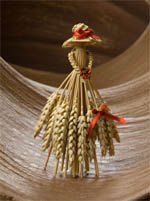 With the reaping ended, the last sheaf of corn would be made into a Corn Dolly, which was meant to embody the ‘spirit of the season’ (in much the same way as we might display holly around the house at Christmas), or to represent the ancient corn goddess.

The Corn Dolly could, though not always, be made in the form of a miniature human, but it could also be an intricate sp

iral pyramid, or a miniature sheaf etc. Other designs could include animals, agriculture tools like scythes and shepherds’ crooks, or objects with a Christian significance such as bells or a cross.

As a child, I knew I was in for a treat. There was, and is, nothing quite like freshly-baked bread, still piping-hot, and covered in lashings and lashings of real butter.

As a child, I remember that many local (north Wales) village communities would keep their Corn Dolly until Plough Monday (that’s the first Monday after 12th January) when, after a procession around the fields, they would ceremoniously throw the Corn Dolly into the first furrow, ready to work her n

ecessary ‘magic’ for the next coming harvest. A sort of libation, paying back for the previous good harvest, and done in the hope of another good, forthcoming harvest. It also ‘hammered home’ the point that in nature there is a balance to be respected: that which is taken out, must be put back. Not just a ritual, but ‘good’ science, too.

We plough the fields, and scatter the good seed on the land, but it is fed and watered by God’s almighty hand… (Hymn by Matthias Claudius, Translated by Jane Montgomery Campbell, and one of my favourite, seasonal, hymns at primary school.)

For many people, today, the harvest service in a Church may seem remote and an age-old custom that is somewhat irrelevant. I don’t believe it is. Even as we visit the supermarket to buy our weekly groceries, we are still dependant on the harvest and the Source of All, for life. Like it or not, we are ‘connected’ to nature.

And, though it make seem strange (or maybe, because of its strangeness) Lammas-tide can still serve us well. It is a deep reminder of our connectedness to nature, our dependence on the harvest, and a way of offering gratitude to The Provider. It jolts us out of our complacency of ‘we’ve always done it this way’, to appreciate something deep and profound, and life-giving that is going on in our lives, now. Even today, Lammas is relevant to those who, yes, experiment with it (if they’ve never considered it before), and experience its depth .

And so, this Lammastide, as it has been since I was a child, I’ll be baking several bara brith, and sharing one – yes, the breaking of bread with family and friends – in a simple, ‘after meal’ remembrance ‘feast’, remembering all the good things that have happened this year, and giving thanks, in silence and humility, to the Source of All for the harvest, for life itself.

Maybe, next time you’ll join me?

{Apologies for the spelling mistake in the title of this post, that may not have been updated by wordpress].

2 thoughts on “Everything You Wanted To Know About Lammas, But Were Afraid To Ask…”