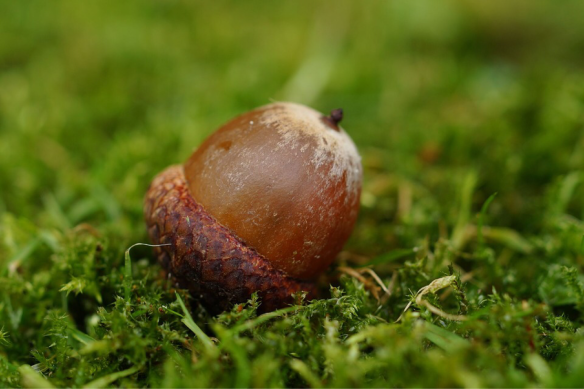 You know I love stories. Well, here’s one that was told to me and a small group some time ago, around a camp fire, late one evening when on a retreat at Penmaenmawr in Wales. Like all good stories, you have to use your imagination and put yourself in it.

Once upon a time, in a not-so-faraway land, there was a kingdom of acorns – a myriad of acorns nestled at the foot of a grand old oak tree.

Since the citizens of this kingdom were modern, and fully Westernised acorns, they went about their business with purposeful energy; and since they were midlife, babyboomer acorns, they engaged in a lot of self-help courses. There were seminars called “Getting All You Can out of Your Shell.” There were woundedness and recovery groups for acorns who had been bruised in their original fall from the tree. There were retreats and spas for oiling and polishing those shells and various acornopathic therapies to enhance longevity and well-being.

One day in the midst of this kingdom there suddenly appeared a knotty little stranger, who apparently dropped “out of the blue” by a passing bird. He was odd: capless and dirty, making an immediate negative impression on his fellow acorns. And crouched beneath the oak tree, he stammered out a strange and wild tale. Pointing upward at the tree, he spoke to all that would listen to him, and said, “We…are…that!”

But, one or two of them continued to engage him in conversation: “So tell us, how would we become that tree?” “Well,” said he, pointing downward, “it has something to do with going into the ground…and cracking open the shell.” “Insane,” they responded. “Totally morbid! Why, then we wouldn’t be acorns anymore!”

In an age when we’re encouraged to grow and mature, and then maybe consider the next stage of enlightenment, and then, after that, to aim for transformation (or achieve however many stages there are), this story is poignant.

I’m sure we all identified with the cynics in the story. Ofcourse, we could read that story, put ourselves ‘in it’, and breathe a sigh of relief that we were cynics at one point in time, but have got past that stage alluded to in the story – we’re now oak trees – and look back, smiling.

The challenge here, is that the story always applies to us.

Regardless of the stage of development we’re at, there is always more. The transformation of acorn to oak tree, as a metaphor, speaks of the need to change, and not just once!

Once, we’re at a mature stage (however we define that), if we really are at that stage, we’ll realise that there’s still more growing and change to be done, whilst we’re in this form.

It’s continual. I believe the sacred text word for this is hagiasmos (saints), but the ‘mos’ signifies an ongoing process, rather like we would tack ‘ing’ on the end of a word to show that it’s continual. That word hagiasmos shows that we are ‘saints-and-being-made-into-saints. In that sense, maybe we are encouraged to be born again, and again, and again? Having a beginners mind?

I’m informed that this story originated with Maurice Nicoll in the 1950s, and Jacob Needleman popularised this metaphor in Lost Christianity and named it “acornology”, and it was retold by Cynthia Bourgeault in her book, The Wisdom Way of Knowing.

6 thoughts on “Acornology: The Story Of The Acorn”