Oh, winter draws on as we move further into Advent. We’re about half way through the month of the Elder (tree), and speeding towards the winter solstice. And, for this month, the associated element is: earth; and the associated plants/trees etc is the holly, ivy, and mistletoe.

Tomorrow is a full moon. However, if you consult some other almanacs then you could be led to believe it is tonight. However, it’s a case that the moon maybe 98% full tonight and waxing (getting ‘bigger’, towards full moon status), but tomorrow it may be 98% and waning (growing ‘smaller’, starting to reduce toward that new moon, ‘unlit’ status). Either night to celebrate the full moon is good. I have a preference for tomorrow, the 14 December 2016.

To the ancient and latter-day Celt’s this full moon is known as the Cold Moon. Others may call it the Oak Moon.

(Derived from Authorised Daily Prayer Book of the United Hebrew Congregations of the Commonwealth, 1998)

There are a number of ancient and modern ideas about the (full) moon which I think are quite interesting to ponder upon. 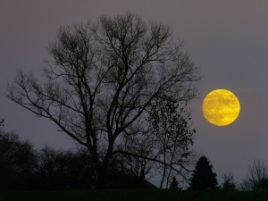 Idea #1: The Moon changes size. The Inuit people that live in Greenland named their Moon god Anningan. They believed, according to their ancient story that Annigan chased his sister Malina, the Sun goddess, around the sky. This tiring work, paired with a lack of food, caused Annigan to get much thinner as the month went by.

This myth was a wonderful attempt to explain the phases of the moon as it recedes from a full moon to a crescent.

Idea #2: A full moon can cause lunacy. Some police and hospital workers still claim that people are wilder on a full moon. Some have laughed at the idea. However, do bear in mind a newspaper report which quoted Inspector Andy Parr, of Sussex Police, who made a crime-connection while analysing crime statistics for the Brighton and Hove area’s “night-time economy”. He said: ‘I thought, we have a limited amount of men and money to spend, so let’s look at the crime figures. I compared a graph of full moons and a graph of last year’s violent crimes.’ and there was a correlation. 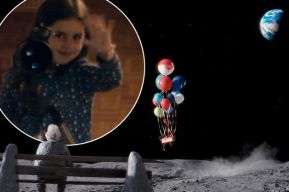 Idea #3: The Moon brings love. In Chinese folklore, Yue-Laou is an old man in the moon who unites predestined couples together. I wonder if the John Lewis company had this story in mind when they ‘screened’ their ‘man in the moon’ tv Christmas advertisement last year? British women as well, who hoped to receive a dream about their true love would recite the following verse under a New moon: “New moon, new moon, I hail thee! By all the virtue in thy body, grant this night that I may see he who my true love is to be.” The Moon has also traditionally been appealed to in order to bring fertility. 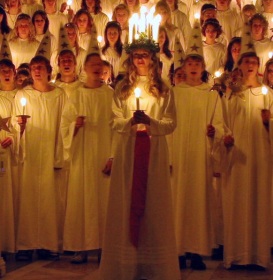 Meanwhile, don’t forget: Today, 13 December, is Saint Lucy’s Day. She was a 3rd-century martyr under the Diocletianic Persecution, who it is said, brought food and aid of those hiding in the catacombs, and using a candle-lit wreath on her head to light her way she left her hands free to carry as much food as possible.

Her ‘day’ used to be celebrated at the time of the winter solstice, which was 13 December on the old Julian calendar, and so is really some ten days away, but when the calendar was change they kept her feast day on the same date, even though it moved the celebration.

Even today, in Scandinavian countries, with their long dark winters, a young girl in many churches and village squares is dressed in a white dress and a red sash (as the symbol of martyrdom), and wears a crown or wreath of candles on her head.