It is no secret that I like ritual. Ritual, if the intention is there, takes us out of ordinary time and into sacred time, away from only an awareness of mundane space and into sacred space; and it opens up a doorway, a liminal threshold to the Other. We enter a place and time where things happen. Really happen. Even if we’re unaware of the sequence of events.

And, it doesn’t have to be formal ritual. There are many rituals, simple ones, too, that are useful to us as individuals, that we do daily, beneficial routines that open the path to the imaginal realm, that realm of power and potential. This can lead to an encounter that can be wholly other (as in the imaginal), wholly ‘here’ (as in the physical realm), but is usually witnessed as a somewhat confusing combination of the two.

‘There are two worlds: the world we can measure with line and rule, and the world that we feel with our hearts and imagination.’ Leigh Hunt 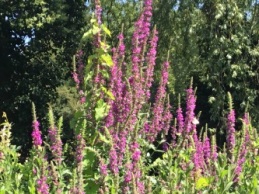 Today was very much like that. One of my daily rituals when in London is to take some valuable time out at the beginning of the day and visit the Magic Café, when in Fulham, south-west, inner London. There, over a latte I pore over a good book for an hour, at least. It is a time of grounding, ‘earthing’, drawing energy into my being to prepare myself for the day ahead.

In many senses I am so absorbed by the book I’m reading, at those times, that events can happen around me and I’m totally unaware of them. I might have ate a croissant and looked up about half an hour later only to find the empty plate has gone from my table. In such circumstance I try to catch the baristas eye and thank him or her for clearing the table, as it might have appeared rude not to acknowledge their good work at the time. Totally absorbed, was I in that liminal realm. The baristas know me well.

The weather in London and, indeed, the UK has been unusually hot. Usually after a few days of hot weather (say, 26 Celsius or hotter), here, the weather breaks, we have a thunderstorm and it goes back to being mild and changeable. It’s been hot, between 25 and 31 Celsius for about three weeks, and although some local areas have had very brief rainstorms, they’ve missed Fulham.

‘Serendipity is the faculty of finding things we did not know we were looking for.’ Glauco Ortolano

And, as it happened, all the outside tables and chairs at the café were all occupied by others when I arrived there this morning. It was clear, there was only one thing for it: order a take-away latte and take myself (and the good book I was carrying) off to a nearby (riverside) park. Bishop’s Park. Ironic, really, as the book I was reading was about encountering nature deeply (in both rural and urban settings), and so I walked the four minutes to the park, slowly (as it was hot) to put into practice what I was reading.

I found a wonderful shady spot near the lake (which, courtesy of the local council’s ‘bio-diversity’ and wildlife welfare policy, is amazingly overgrown at the edges). It is a beautiful area. The sun was hot, the sky blue and cloudless but I was in shade. The air was filled with the fragrance of a myriad of flowers, and birdsong. I sat on a bench to read my book and occasionally sipped the coffee.

I read for about half an hour but was disturbed by a few ducks that had arrived and stayed for several minutes, a couple of dragonflies who seemed to want to ‘buzz’ me, and a large water rat that ambled out of the undergrowth and came towards me at some speed, stopping about six feet (two metres) in front of me, sniffed in my direction in an exaggerated manner before shuffling off.

Ofcourse, these weren’t interruptions at all.

‘We live in a relative and contradictory world. We go to work, care for our family and friends, and manage ordinary details every day. And yet we are timeless. We are the rhythm of life’. Llyn Roberts

If the book I was reading was anything to go by, and it is a good book by Sandra Ingerman and Lllyn Roberts, then this was just the time to take up one of its suggestions to put the book to one side. I did.

I relaxed, adopted a meditative state, half-closed my eyes and revelled in nature that was all around me, and if you take into account the fragrances in the air, then nature was within me! And, there’s more. As I sat there, in the middle of London in a lovely park, and in an awesome, overgrown, lush area of the park, ‘disturbed’ only by nature,  I was in bliss. I wasn’t apart from nature looking on, but was part of it, part of that rhythm of life.

It was then that I saw, resting on undergrowth to my side, a wonderful dragonfly – well, actually a damselfly. Very similar to dragonflies, but they’re smaller. They are close ‘cousins’ to the dragonfly. Both are members of the odonata order. So-called by a Danish zoologist some two hundred years ago who, mistakenly, thought they had teeth. The lovely creature resting on a flower was a (UK) common blue damselfly. Magnificent.

In the world of the imagination, myth and magic, it is said that dragonflies and damselflies were the dragons of old: think scaly winged, fire-breathing creatures. Now, much smaller they are ‘disguised’ when they appear in this realm.

They are said by some to be one of nature’s shape-shifters because they inhabit two elemental realms: air and water. Some believe that to see them up close means that your life will never be the same. Others believe that such creatures break down ones illusions and expose truth, usher in winds of change, wisdom or enlightenment, and if one lands on you then good luck is sure to follow. Dragonflies carry messages that deal with deeper thought – and they ask that we pay attention to our deeper thoughts and desires.

‘It is one thing to read about dragons, and another to meet them.’ Ursula Le Guin

I’m told the Swedish name for them is trollslända, which means ‘hobgoblin fly, and comes from a time when dragonflies and damselflies were thought to be the ‘horses’ for elves, brownies and the fae, who would travel around on their backs.

Meanwhile, that wonderful common blue damselfly was still resting on that nearby plant, and then suddenly he or she flew off. Gone. Did its presence have a significant meaning?

At one level it’s clear that nature is flourishing in this place and I (and you, wherever you find yourself, and even in the city) are part of it: connected. At another level, there is the view of acceptance, that we are one with nature and nature is one with us: kin. And, at a still deeper level, maybe there was a ‘message’ today in that damselfly’s visit that was pertinent to me (just as at other times and places other events are pertinent and meaningful to you)? Awareness.

Mark Nepo calls such events ‘quiet teachers’: natural events that can speak volumes to us, if we but take time to rest and let natural wisdom ‘soak’ into our being so that we are ‘taught’ something special, and deep, and wholesome from that event. It’s what our ancestors, ancient Celts, Druids, Pagans, ancient Christians and others would have understood, almost without trying. Participation mystique, or mystical participation. Something that doesn’t come easy to us, but which can be experience with some intentionality.

Why, then the wise thing to do is ponder upon its meaning and apply it to ourselves. Or, perhaps, or in addition to all this, is the fact that each of us are blessed in living on a wild and ‘life-full’ planet (whether we live in a rural or urban setting), and are part of the web of life; and today, in one small way I spied another creature, a dragonfly/damselfly also attuned into, and part of the web of life, and in looking beyond the veil I understood it to be a gift from the Source of All to you and I, and others. Gratitude.

7 thoughts on “Here Be Dragons: Encountering Nature In The City & Looking Beyond The Veil”