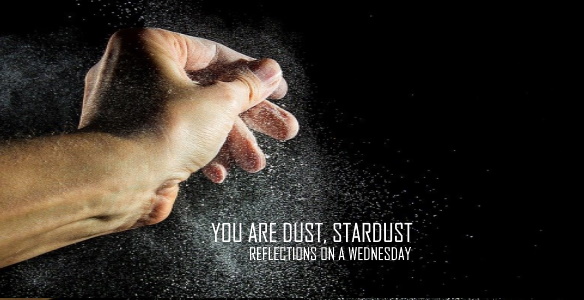 If you’re in the United Kingdom and hold to those old traditions and customs then you will know that yesterday was Ash Wednesday. The day before, Tuesday, commonly known as Pancake Day, was when, so it is said, in years gone by,  it was the day to use up the flour as Lent, a time of fasting, was about to begin. And what better way to use up that flour than by making pancakes, coupled with sugar, syrup and/or fruit, and lemon juice. As a wee lad I can remember trying to flip the pancake over as it cooked in the frying pan and usually (but not always) getting it right. Great fun and a good tradition that many, even today, experience.

But, yesterday was Ash Wednesday, the day when, apparently, we are to remember the fact that we’re dust, animated dust, earth, or (poetically) clay! It’s a time of reflection, to consider our humility and frailty. And, what follows is a reflection on that!

We are (earthly) dust!

The ancients, living in a pre-industrialised, pre-scientific, pre-computerised age would have been more easily be able to reflect on this. It was there evident in their daily life: the cycle of birth, growth, death, re-birth etc. The changing of the seasons, growth from the soil, abundance and then decay as plant matter rotted and became fodder for the next year’s growth. All this would have been known to them, and death and dust would have been very familiar to them. As would their humility to the forces of nature, and their frailty.

It might seem morbid to dwell on this, but we live in an age of scientific marvels and do things in such a way that the experience of witnessing the demise of those around us is minimised, that we can become forgetful that we are dust! We are frail creatures! And, we only have a limited time here! Even if we don’t uphold the Ash Wednesday tradition, I do believe there is some mileage in thinking upon it, and what it means to us.

But, you know me – there’s more – and life here is followed by a returning to something else that continues onward, which some call the Summerland, heaven, elysium, arcadia, valhalla, nirvana or Jannah.

But, it’s good to remember that we are dust and will return to dust one day, for then it will encourage us to use the time we have here even better than we might hitherto have done. In this form, we only have now! And, Ash Wednesday is a great time to reflect upon that.

‘In reality, we are all travellers – even explorers of mortality’, (Thomas S Monson)

However if you didn’t get around to reflecting upon that fact today, and maybe wanted to have some form of quiet meditation, or liturgy, or poem reading to add to the event, you can always do that tomorrow. It’s intentionality rather than the exact timing that is important.

But, there’s always a flip side to these ideas, and always a balancing thought. We are dust, and will one day return to dust, and so we’re encouraged to make good use of the time. But. It’s not all negative. Apart from the Summerland, heaven, elysium etc, we can view our ‘dustly’ composition in another way.

Yes, many of you will know that I’m an amateur astronomer. Nothing pleases me more than gazing up at the moon and its phases, the progression of planets across the night sky, and the constellations that rise, like Orion denoting the winter months are here, and fall in the sky as the seasons change. They are are great way to mark the seasons, and something the ancients, our spiritual ancestors, would have been doing for several millennia, quite naturally. Unlike them, I’m be blessed with such ‘tools’ as a Meade LX200 12 inch telescope (computer controlled), a planisphere, and a star atlas. But, the awe of gazing up and looking back into the distant past is always, always thrilling, as it must have been to them.

In looking up, we look at the Universe and a myriad of points of lights which are stars and galaxies. But, in doing so, we often make the mistake as though there’s some invisible barrier between us and the Universe. Yes, we live on the Earth and have a biosphere that makes life possible, but anyone looking this way, say from Alpha Centauri, would see our sun as just another point of light in their night sky, and not differentiate it from the Universe.

‘We are stardust,
we are golden,
and we’ve got to get ourselves
back to the garden’

In many senses, there is no barrier, no separation, and the idea that the Universe is ‘out there’ and we are ‘down here’ is an illusion – and probably one that our ego quite likes as it makes us feel different, and therefore special.

(We Are Stardust, Symphony of Science. Hear the song/see the video here.)

There are different ways of thinking about our connectedness to the Universe. The ancients celebrated the season and they believed what happened ‘up there’ affects ‘down here’. I don’t think they were far off the mark. NASA regularly montiors the sun for sunspots and coronal mass ejections of plasma, for instance, and issues warnings about ‘space weather’ which can affect national and corporate satellites, GPS, and even national electric grids. Others, may have ritualized that connection as in the first few chapters of Genesis, and still others by telling the story of Indra’s web (see here).

And, so today, as you read this do remember you are dust: connected, cosmic star dust!

2 thoughts on “You Are Dust, Stardust: Reflections On A Wednesday”