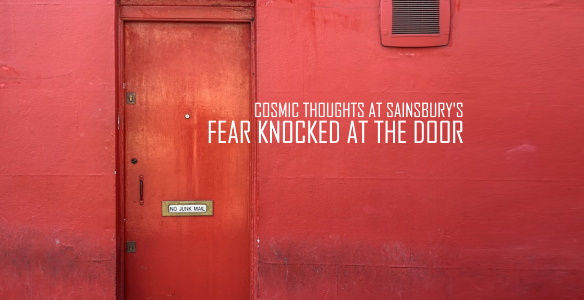 And so, I extinguished the single candle, symbolically showing that the ceremony was over. As I sat there, imaginally coming out of that sacred time-space into the mundane (if there is such a distinction) I clapped my hands. The latter, is grounding, and a good way to physically declare that ‘normality’ has been achieved.

Having tidied up, I picked up the shopping list and headed towards the door.

We are ‘amphibians’, of sorts. We live in the world of the physical universe where it’s necessary to be aware of time, to buy food and eat it, and yet we commune with the Beyond. Probably not at the same time, usually, but in one sense that demarcation is artificial and an illusion, and those who are aware of that joining of ‘the two rivers’ are best placed to experience liminality, a ‘thin place’, a peak experience, and go deeper.

’She was half human….half universe’ (A R Lucas)

But, we are ‘amphibians’ moving through two realms. Sainsbury, however, in these days of the coronavirus, was an experience that ‘brought me down to earth’. The long aisle which usually houses a glorious mix of vegetables on either side of the aisle, empty. Completely empty. I turned the corner, and entered the aisle where fridges on either side would normally house meat. Empty. Completely empty.

Some people ambled around with a single shopping basket, others meandered with those huge shopping trolleys full and overflowing with toilet paper, pasta, and bottled water. And not just one or a few of each products, but dozens!

Shopping at Sainsbury’s was an experience. Some people were even tempered and moderate in their buying prowess. Others seemed to exude fear and panic. Electric tension filled the air.  They had that grim look of determination on their faces that declared that all should move out of their way as they charged towards the checkout with more than enough. Ofcourse, ordinarily, that wouldn’t have mattered, but these are extraordinary times. Their shopping trolley abundance meant that, perhaps, others with their shopping basket would go without.

As a species have the ability to dance with the gods, and yet some still persist in picking up the jaw bone of an animal to slay their neighbour, metaphorically. Now, I know people are frightened, scared of what might happen, but we have a choice.

Fear or hope? We need to choose well.

There is a story, a fable purportedly that comes from one of the American First National people. ‘One day a small child ambled towards their grandfather, and said, ‘Why is it that it feels like there are two dogs fighting within me, grandfather?’.

‘Indeed’, he said, ‘there are two dogs fighting within every person. One dog is crafty, wicked, greedy and violent. He looks out only for himself. The other dog looks out for all people. And, he is honest and kind, full of grace and generous. But, they fight.’.

‘So, grandfather,’ the small child said now rather worried, ‘which one wins?’

The small child’s grandfather replied, ‘Ah, whichever one you feed!’

We’re living through tough times at the moment, and we have a choice. It’s easy to be nice and loving, to declare our spirituality or religiosity to others when the going is good. But, the real test of our faith, our spirituality and love for humanity is how we react when the going is tough. It doesn’t matter how many Bible verses we’ve memorised or whether we can recount major parts of the work of Talisin, whether we wear a fish badge or the hammer of Thor if we don’t have a spirituality that is deeper than that, that looks at fear and replaces it with hope, and acts in a way that shows love to others whatever happens.

‘Fear knocked at the door. Faith answered. No one was there’. (English proverb)

This article is an encouragement to you and myself not to give in to any fear we may experience – and we may, but to rise above it and to consider others as much as ourselves. We have a choice. Choose well.

These times are ‘…a test of our solidarity, our common sense and our love for each other’. (Angela Merkel).

It is difficult for each one of us, but it is the Golden Rule, and it’s logical, and it works, and it’s great to do and receive; that is to ;treat others as you would want them to treat you’.

And, so having bought a bottle of bleach (you can never have too much bleach), a jar of Marmite (you either love it or hate it), and having bought half a dozen small beers (someone said beer was a sign that God loved us), I headed towards the self checkout area, scanned the products, knowing that the green, amber and red lights on the pole would blink red. A sign for one of the shop assistants to come over, put a code in the machine to show I was of an age to buy alcohol. And, it blinked furiously.

She saw the red, blinking light. A stony-faced woman (the kind you would never play power with), tired and fed up, headed towards my direction. It had obviously been a tough day for her. She had probably had to deal with a myriad of impatient, complaining customers arguing over the last toilet roll in this massive supermarket.

‘It’s blinking red because I’ve bought alcohol’, I said. As she came closer I pulled out my driving licence and waved it in her direction, theatrically, and said, ‘Here’s my age ID’. She looked at my driving licence, looked at me – seeing me as a youthful sixty-five year old face – and laughed. I laughed too. Her stony-face and the angst of many angry customers simply melted from her face, disappeared into the Universe, and she cheered up. ‘I appreciate what you do,’ I said. She responded with a pleasing, ‘Thank you, that means so much to me’.

I am just like you, knowing that we often undervalue people who do the toughest of jobs. But, your mission and mine, should you and I choose to do it, is to treat others the way you would like them to treat you, tomorrow.

In AD 1416 at about the age of seventy-three Julian of Norwich passed on. She had spent most of her life as a deeply spiritual woman, wrote some great words and spoke out, about hope, in an age when institutions around her were negative, blaming the poor, and a plague killed millions of people in Europe. Like a beacon of hope in a dark, fearful, seemingly hopeless world, she reached out, bucked the trend, got into an awful lot of trouble for speaking the truth, and her words are as important today to us as they were then.

These are tough times. Don’t feed the fears, please. It’s going to get better. We can do it. It’s not easy. We have a choice. We can do it – tomorrow is yet another opportunity to brighten someone’s day and be a beacon of hope and love. And, I believe that what we give out, comes back to us a thousand times bigger. So, get ready for a huge blessing.