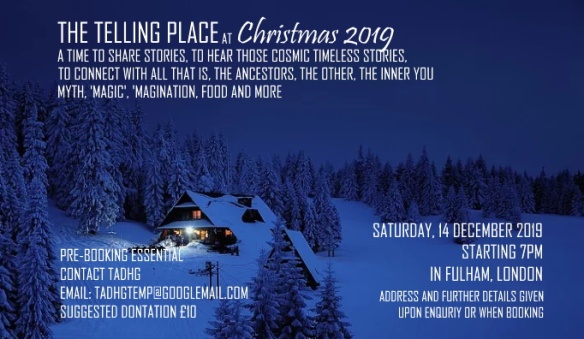 In an age where mystery seems to have retreated, here’s an opportunity to do what the ancestors did: to re-connect at this time of the year when the veil between Here and There is ‘thin’.

This will be an evening to share, to hear, to do, and to be transformed. If you’re in/near London do contact Tadhg by email [email: tadhgtemp@googlemail.com ] to find our more and/or book. You are invited! Limited to 20 people, and pre-booking and an adventurous spirit are essential.

‘What is the one message that only you can give? It’s your story’. J R Rim

It was a cold, dark, December’s evening. The café had shut to the general public an hour ago, and a few changes were made – a few festive lights added, a few unlit candles placed on tables, a few symbolic items, ‘tools’ or conversation pieces were placed on the tables, and food was placed on the corner table – in anticipation for the Telling Place event 2018 (and so, if local, there will be another this year, so do please read on… but please read on anyway as it was a wonderful event).

Ah, the Telling Place event: a place of myth, ‘magic’ and imagination.

‘Every human is an artist. And this is the main art that we have: the creation of our story.’ Don Miguel Ruiz

The clock chimed 6.45pm and the doors were unlocked, and within minutes several people ambled through the door, out of that cold night, and into a café that was warm, bedecked with Christmas lights, albeit rather subdued lighting, and expecting the unexpected. The café can hold about twenty people and it soon filled up with expectant ‘adventurers’

The ancients knew the value of story-telling, when they met together at Telling Places. There, fragments of memory were woven together, and ‘bits’ become ‘whole’, and all added to the complete story. Everyone was included. Fragments of memory, separate and ‘isolated’ were re-membered. The opposite of dismembered. ‘Re-joined’. Put back together again. And in community, too.

‘We keep stories alive because to re-member is to put broken pieces back together. We keep learning from stories how to make things whole.’ Mark Nepo

The ancients, those Celts and Druids, ancient Hebrews, Christians, and others, of old, knew of the benefits of stories. They would regularly meet around the village fire, in the evenings and tell stories that were, perhaps sometimes of individuals around the fire, or of ancient heroes and their ancestors, or of stories of cosmic proportions eg creation stories and/or of the tribe’s origin.

But, what about us? In this part of the twenty-first century there is a great need for that kind of event, and this Telling Place fulfilled that requirement wonderfully.

“Tonight, is a time of listening, a time of sharing a story (whether something from your own life-story that is not too personal and which can be shared), or a story that you have heard and which means a lot to you. Stories of dark and light, endings and beginnings, down and up, of people and places. Stories to make you think. Stories and a few activities, yes a few activities that you will be invited to join in, that make you go ‘oh’, or ‘awwww’. Stories of  myth, ‘magic’, and imagination.”

“There will be stories about myth – those fictional and some-times factual foundational accounts on which we base part or all of our life. Stories about ‘magic’. Not the conjuring sort of magic, but the kind that some would call a numinous event, a peak experience, a transformational event. Come expecting to be changed. And, there will be stories of the imagination, and here there may be some pleasurable and non-cringe-making activities you will be invited to take part in. More will be explained as the evening goes on.”

“But, for now relax.”. A short time was given over for people to amble and introduce themselves to four other people in fifteen minutes – no mean feat – as they tucked into some delightful food from the smorgasbord and filled their glasses with various chilled fruit juices. Everyone talked enthusiastically. A hub-bub ensued, sounding rather like the friendly drone in a bee hive.

‘The imagination of early childhood has no limits. This is why children are fascinated by stories. A story has permission to go anywhere….The child rarely experiences the story as an observer. The child enters the story, it experiences the drama from within.’ John O’Donohue

Now back at their tables, everyone settled down. Tadhg explained as he went along, and opened the Telling Place officially.

A candle was lit, and in doing this simple ritual, Tadhg explained that it was as though we had been pulled out of physical time, as a group, and  into sacred space-time, and were propelled back in time to engage with the Ancestors in story. Or, was it that they had joined us? Or was it more than just seeming so? Was it happening in actuality? However, we understood it, he explained that this was to be a meaningful time of remembering.

I have a feeling that my boat
has struck, down there in the depths,
against a great thing.
And nothing happens! Nothing…Silence…Waves…

Nothing happens? Or has everything happened,
and are we standing now, quietly, in the new life?

“This remembering”, Tadhg continued,  “is called anamnesis: a remembering that makes the original event present to the believer. In a very real sense, ritual negates time and space. The Passover Seder, for instance, starts with the question, ‘How is  this night  different from all other nights?’ Ritual, then, brings the participant, that’s us, into that timeless realm of the sacred in which the time and space that separates us  from the original event, or which separates us from the Other, just disappears.”

“It’s not just remembering. It’s a re-experiencing and a re-connectedness to that former event – in this case story and the Ancestors. Anything less that that, is merely mimesis, an imitation or re-enactment. This is more”

Several people shared stores. Two shared stories from their own life, stories of challenging times and of overcoming. Two other shared stories, fables, that had meant a lot to them and which were well received by all. The evening continued well, with each person giving support and praise to others, as well as receiving it. It was so uplifting. Awesome.

At this point he explained that, at the end of the year it was a good time to review the positive and the not-so-positive events of the year, and to deal with them. He suggested that each person takes two pieces of paper. One would, if that person so wished, would be displayed on the wall later and would contain one or two positive highlights of the year. It would be a form of written gratitude to the Source of All. The other piece of paper, would be private, and would highlight negative points and negative thoughts and actions that had happened during the year. People wrote feverishly. A few minutes later each person put the gratitude sheet on the wall; each person took the sheet of negative thoughts and actions and, at Tadhg’s suggestion,  symbolically dealt with them by placing them into the shredder machine.

Tadhg said a few words…ensuring that that negativity was truly gone! Dealt with. Gone for good!

‘You are the fairy tale told by your ancestors.’ Toba Beta

More stories were shared. Tadhg lit another candle, and talked about remembering those who had gone before us – to remember them with joy. He talked about how our ancestors would have used this time to celebrate the lives of the Ancients, and of Modranicht, called  “the Night of the Mothers” or simply “Mothers’ Night”. Everyone had been asked to bring a copy of a photo of a deceased relative that they wanted to honour, and some also shared stories – many quite witty stories that made many smile, and all uplifting – about loved-ones that had passed-on.

Later, Tadhg lit another candle. This time, as some time had elapsed and the evening was drawing to a close, he asked each person to close their eyes, to meditate, and to use their imagination.

“If you would, imagine that this room is filled with your Higher Self, or an elemental, a goodly spirit, an emissary from the Source of All, from the Universe, an angel or fae perhaps. Don’t worry about what they look like but imagine they have a message for someone in the room – not you – but for someone else, and it’s one word, or two, but no more than three, and it’s uplifting. “

As people thought deeply, used their imaginations and opened themselves up to the Other, the haunting melody of ‘O Come, O Come Emmanuel’ by Enya played in the background.

“You can imagine them speaking this to you” , Tadhg said, “or writing it down, or them giving you a book with this word or words as the title. Now, when you have it, open your eyes and write it down on a piece of paper.”

Everyone wrote something, and everyone shared the word, two or three, not knowing who it was for. Although Tadhg said those present may want to share any word spoken that was relevant to themselves, others, he said, might just quietly like to ponder upon a word heard that they felt was relevant to them, quietly in their heart.

The event closed with the extinguishing of the candles, as Tadhg explained that each of us were now moving back into mundane time. He suggested we all stand, and applaud – applaud each other for making the evening such a joy, applaud the Other and The Invisibles present for being present, and applause as a form of ‘grounding’.

One by one, people left. That evening tears were shed, smiles were witnessed, and many were transformed. Each had had an encounter with the Other. In the distance, as car doors opened and closed, the hushed whispers of ,‘See you at next year’s Telling Place’, could be heard.’

‘I dreamed I was a butterfly, flitting around in the sky; then I awoke. Now I wonder: Am I a man who dreamt of being a butterfly, or am I a butterfly dreaming that I am a man?’ Zhuangzi

[Another Telling Place event is planned for Saturday, 14 December 2019 in Fulham, London (starting at 7pm and finishing at 9pm. And, you are invited. Suggested donation is £10, but no one should be deterred by a lack of funds. Come anyway! If interested or if you require further information, please contact Tadhg by 1 December by email: tadhgtemp@gmail.com ]